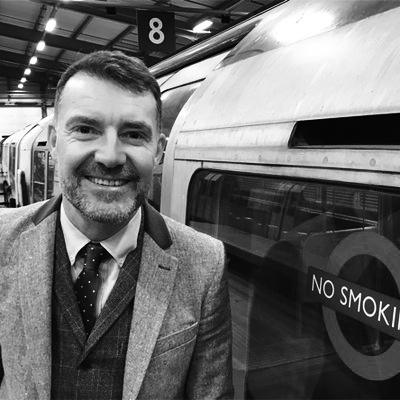 Internationally renowned design historian Mark Ovenden is an author, presenter and lecturer whose best-selling books have been translated into many languages. His recent one-hour TV documentary for BBC4 was watched by 400,000 and book sales are approaching a quarter of a million. Mark brings joyful insight and accessibility to what might on the surface appear dry or technical subjects.

His infectious enthusiasm enthrals audiences. His books focus on the cartography, design, architecture, signage and typefaces of public transport networks. Mark is a fellow of the Royal Geographical Society with a following on social media. He was born and brought up in London and lived in various cities in France, the USA, and UK. His background was in broadcast and print media. Before returning to his love of maps in the early â€œnoughtiesâ€ he worked as a presenter and producer for the BBC and commercial radio stations.

Recent works include a revised edition on â€œTransit Maps of The Worldâ€ (2015 – then Japanese and Spanish language editions of it), â€œJohnston & Gillâ€ (2017), and the forthcoming â€œAirline Maps of the Worldâ€ (2019). Mark is now based in Manchester, UK where he is also continuing with book projects and making radio & TV programmes.

All Sessions by Mark Ovenden